SF ENGINEERING SYSTEMS (INDIA) PVT LTD, post tensioning company  was established by a team of Singapore and Indian experienced professionals in the year of 2013 with the aim to provide value added engineering solutions to our clients using post tensioning system.

We as a specialist agency in post tensioning, offer efficient structural Engineering consultation solution to building and infrastructure works. SF ENGINEERING SYSTEMS (INDIA) PVT LTD, post tensioning company  was established by a team of Singapore and Indian experienced professionals in the year of 2013 with the aim to provide value added engineering solutions to our clients using post tensioning system.

We as a specialist agency in post tensioning, offer efficient structural Engineering consultation solution to building and infrastructure works. We involve in exploring appropriate post tensioning systems and construction, Post Tensioning design & Execution and precasting services to assist the clients in enhancing their projects build ability and cost-effectiveness.

All Directors and managers have more than 10 years of post tensioning and specialist work experience with a team of 50+ Engineers & Technicians. 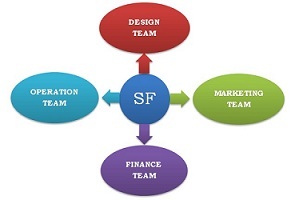 SF ENGINEERING SYSTEMS  PVT LTD is a leader in providing value added construction services to our clients / structural Engineering consultants / architects by creating a successful partnership with them throughout the construction process. Our pledge is to establish lasting relationship with our clients / structural consultants / architects by exceeding their expectations and gaining their trust through excellent performance by every member of the construction team.

Our vision is to pursue excellent track records through dedication, experience, and disciplined employees with an ongoing passion to deliver quality, timely and profitable projects. 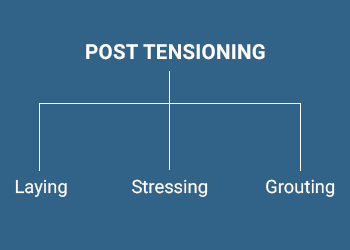 Post tensioning is where prestressing force is permanently introduced into the concrete structure after the concrete has hardened. By stressing properly positioned high strength prestressing tendons with the help of Stressing Jack.

Concrete has high compression capability (the ability to withstand load) yet weak in tension. It will crack under pulling forces.

In conventional concrete construction, if a load is applied onto the concrete beam, the beam will tend to deflect under the weight of the load. And it is under this deflection, the concrete that is furthest away from the load will tend to be stretched and get elongated. However small the stretch or elongation, it is enough to cause the concrete beam to crack. And to eliminate this problem, operators will normally embed rebar cages to act as tensile reinforcement to counter this phenomenon. But these rebar are passive by nature! That is to say, these rebar are not carrying any load. Until such a time when the concrete started to deflect and crack, the rebar will then start to carry load and work against the force of the crack. You can say that rebar is a passive reinforcement.

However, in post tensioning, the tendons are active reinforcement. The prestressed force in the tendons will enable the beam to withstand and carry the load. And under proper design and installation, post tensioned beams have minimal deflection and almost no cracking issues, even under the conditions of full load.

Post tensioning is a technique for reinforcing concrete. Post-tensioning tendons, which are prestressing steel cables inside plastic ducts or sleeves, are positioned in the forms before the concrete is placed. Afterwards, once the concrete has gained strength but before the service loads are applied, the cables are pulled tight, or tensioned, and anchored against the outer edges of the concrete.

Each has its advantages. Pre-tension is are preferred for mass production of similar setup off-site (e.g. concrete piles) . The setup is more complex and is more delicate in details. Post-tension is preferred for on-site installation. The stressing equipment is portable and easy to use.

How it affects construction schedule?

Pre tensioned members are fabricated off-site. Delay in delivery or production will cause delay in schedule but the installation is easier but also utilizes an enormous time in the crane. Post tensioned member however are installed on site. Once the structure is concreted the stressing is no more critical in the schedule. BETTER

How it affects design?

The good thing about pre tensioned members is that it eliminates the loss of strength due to friction of tendons against the tendon duct. BETTER Post tensioned members are subject to friction loss. Note that we have several prestress losses: anchorage slip, friction loss (for post tensioned only) , elastic shortening, creep and shrinkage of concrete, and steel relaxation. The first 3 are called Immediate Losses, and the last two are called Time Dependent Losses.

Post Tensioned slabs are used when spans are large and normal RCC slabs become uneconomical. PT slabs have lesser thickness than RCC slabs as their deflection can be controlled by post tensioning. Post Tensioning also results in lesser reinforcement in the slab. Due to lesser thickness of slab, its weight also reduces which in turn economizes the design of columns, and due to the fact that mass of the whole structure reduces, it results in reduced base shear due to seismic loads.